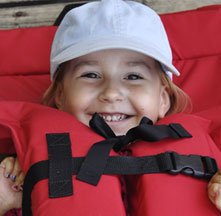 Asha was born 11 May 2011, a few days earlier than expected. Her older sisters, Meera and Emily, were thrilled with the new addition to our family. Asha initially thrived. Few could resist her big brown eyes.

We began to have concerns about Asha's development when she was five months old. Although she had begun rolling and pushing herself to her forearms, she had four short episodes when all of her muscles shuddered. We mentioned this concern at her six month check-up and she was referred to a pediatric neurologist at our community hospital. When she was assessed at nine months, she was diagnosed with benign congenital hypotonia and we were told not to worry, she probably just "wouldn't be chosen first for the baseball team".

We remained concerned, however, as she did not seem to be gaining any strength. Following her 12-month visit, we started meeting with physiotherapists, but again, she was not making any gains. Asha then started daycare and developed two pneumonias in quick succession. One of Asha's parents is a physician and we looked up causes of hypotonia. Asha's symptoms seemed to fit with SMA. When she was 15 months, we requested the blood test. We received the positive result one month later. It was devastating. We were truly lost and felt alone, scared, and incredibly sad – the crying didn't seem to let up for months. It still comes, often when we least expect it (including while writing our story).

Along with the diagnosis, we were given a few flyers and a folder introducing us to Families of SMA Canada. It took a day or two to write the email, but we felt like we had our first ally when we heard back. Over the next several months we began meeting other families in the Ontario chapter and continue to appreciate greatly their support and creativity.

Asha is now a very busy three year old. She regularly attends music, swimming, and art classes in the community. She also goes to preschool twice a week. She is the proud owner of her new "zoomer chair"; toes and walls beware!
​
Asha and her sisters are looking forward to the 2015 Rebecca Run and we are delighted Asha is this year's Honouree. Go A-Team!